One of my goals this year is to share more writing with more people. Tactic #1 is to pull shareable things out of private channels, and share them.

This is from an email I send to some of the founders I work with.

The new year is a great time for kicking the tires on context.

Happy New Year. I hope it will be a year of growth and renewal for all of us, our businesses, and the world.

Your business competes in a context, and that context will always change faster than you can. It’s your job to try keep up.

To that end, here are some recent reminders of the context equations I recommend processing your business through as a leadership team. The goal is not certainty, but clarity on the information you have, the decisions you’re making, and the tradeoffs they create with your expectations, time and resources.

Are the table stakes of your business still clear and sound?

Do you know what mattered over the last year, and what tradeoffs you’ve made?

Use the exercise to:

Have we connected our strategy to our activity? 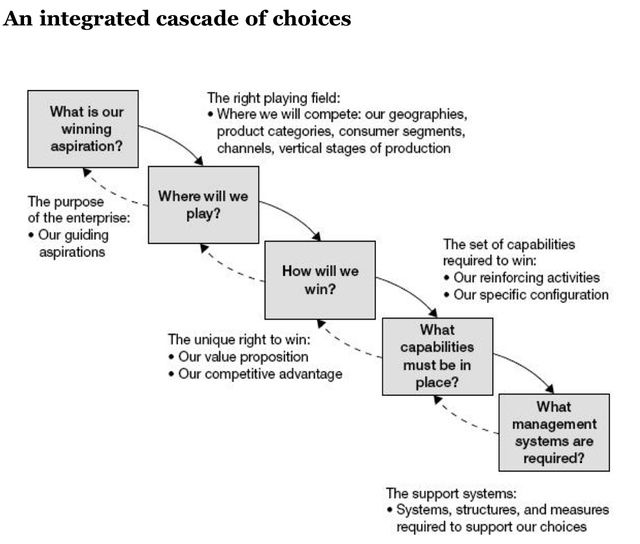 Finally, context is the environment for change. Most change fails, and most businesses fail as a result of it. The hard work on leadership is understanding the needs, gaps, and drivers that will enable your business to become what it needs to be to succeed.

Noah Brier, founder of Variance.com & Percolate, has a useful framework for thinking about systems change and its set of component drivers. 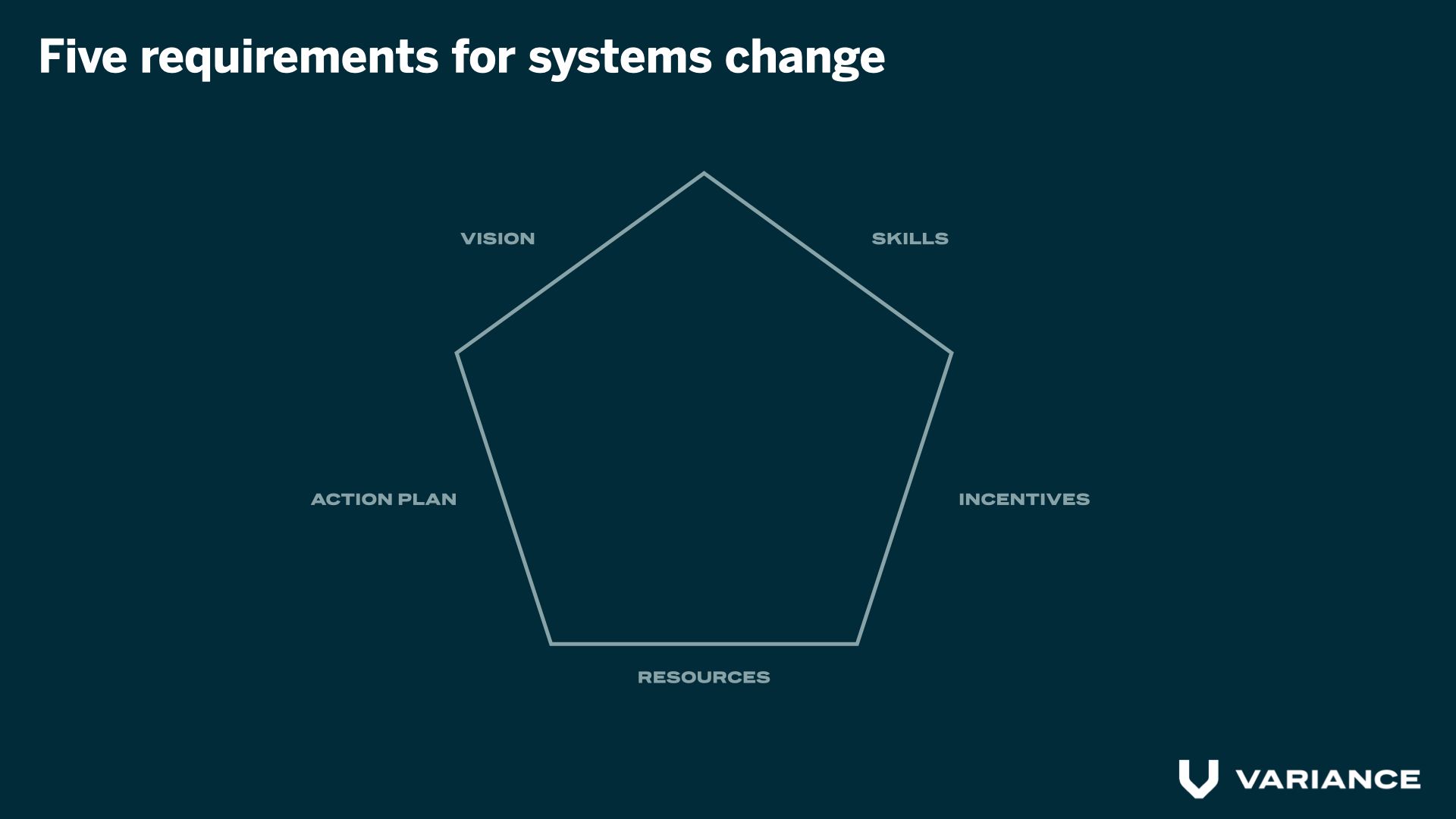 Each enables a different organizational behavior. And the absence of any has direct executional effects:

Assess your gaps, and plan to address them.

Addendum: Just ran into this post by Hunter Walk on OKRs, and how early stage co’s should think about goal setting:

What would I recommend for the Maker-side of early startup companies instead of Quarterly + Calendar Year Annual? These three:

For me, Monthly Goals combined with N+12 Goals create the right short-term Maker cadence with longer term vision. I never got the chance to try it at Google, but hope to find companies using this sort of planning cycle to see how it works for them.

I read a study of what kind of creativity drives effectiveness in marketing stuff.

Not originality, disruption or anything else.

Literally, elaborating on the most important or interesting point in the most arresting way.

Which, of course, it obvious.

But there’s something inherently unstable about the idea of publics. Publics are always changing. It’s in their nature.

Publics may break apart or mutate into something else completely. Whether it happens naturally or intentionally. This happens with the onset of new ideas coming to public consciousness. This may be problematic because we are in the business of disseminating new ideas.

Le Guin says she set out to write “an anarchist utopia,” but the subtitle which has been attached to the book since a copywriter for an early edition came up with the phrase calls it “an ambiguous utopia.” Le Guin as political thinker wanted construct an ideal, but Le Guin as novelist — as a close and shrewd observer of “the crooked timber of humanity” — couldn’t do that. She had to acknowledge the flaws that creep into every social order because every social order is comprised of people.

This chastened view of anarchism strikes me as the proper one. The founders of the anarchist colony on Anarres certainly wanted to make it impossible for anyone to become Sabul — thus especially their constructed language, Pravic, which tries to remove from lanugage and therefore from thought the idea of possession or ownership — but Sabuls there will always be. The feasible goal of anarchist order is to reduce the number of Sabuls and, when they arise, limit their power over others.

He went there not to isolate himself but to situate himself “a mile from any neighbor”—distant enough for independence, yet close enough to remain within earshot. Walden addresses itself to “you…who are said to live in New England,” and its epigraph declares its intention “to wake my neighbors up.”

These abolitionists, each in his own way, convinced Thoreau that “a million men are of no importance compared with one man…[who is prepared] to do right.” Like them, Thoreau wanted to stand as a majority of one. “Any man more right than his neighbors constitutes a majority of one already,” he wrote in “Civil Disobedience.”

In 1842, three years before building his cabin at Walden Pond, he wrote in his journal: “I have no private good—unless it be my peculiar ability to serve the public—this is the only individual property.” By “public” Thoreau meant many things: the human community of Concord where he spent most of his life, rooted like a tree; the surrounding woods, waters, and wildlife that community shared in common; and the country at large. In everything he did and wrote, Thoreau identified himself first and foremost as a citizen, not only of his hometown and the American republic, but of the natural world that provided them with their material foundations.

I don’t explore these via an explicit Q&A, but more in a sort of bingo-card format, where I look for answers to these in a free-form conversation. For me, it’s a way to efficiently learn about the business, and for them, it tends to be a useful exercise to turn an unconscious sense of the state of play into a conscious one.

Interesting paper on recent hack-and-leak operations attributed to the UAE:

Abstract: Four hack-and-leak operations in U.S. politics between 2016 and 2019, publicly attributed to the United Arab Emirates (UAE), Qatar, and Saudi Arabia, should be seen as the “simulation of scandal” ­– deliberate attempts to direct moral judgement against their target. Although “hacking” tools enable easy access to secret information, they are a double-edged sword, as their discovery means the scandal becomes about the hack itself, not about the hacked information. There are wider consequences for cyber competition in situations of constraint where both sides are strategic partners, as in the case of the United States and its allies in the Persian Gulf.

NEW FROM MEFor the Economist, I’ve written about gossip, or the lack of it, during lockdown, and why I fear it may be terminal decline. Gossip depends on privacy, and we live in an increasingly online world where real privacy is scarce. I argue that we’ll all be worse off without gossip, particularly in the workplace. (Gated, sadly).

The book came out of a moment a few falls ago—I’d just come back to teaching after some time off and, after a good class, standing there in the empty classroom, was struck by how much teaching at Syracuse had meant to me over the years. It’s been, really, the foundation of my creative life. (Teach a little, write a little; teach a great story, resolve to do better in my own work.)

The Color of Objects

Here we consider the color of an object illuminated by white light. Color is produced by the absorption of selected wavelengths of light by an object. Objects can be thought of as absorbing all colors except the colors of their appearance which are reflected as illustrated in Fig.

Here’s an example of the sort of lesson you get. Kasparov recounted a phase in his career when he was so dominant and so experienced that young players tried the strategy of trying very unusual, little-studied variations, in the hope of neutralizing Kasparov’s experience. Turned out to be nearly always a bad move. Kasparov’s conclusion: those unusual variations were unusual and rare for a reason, they mostly suck. When a domain of practice has as long a history as chess does, you can be fairly sure that if some patterns don’t show up much, it’s more likely because people have concluded they don’t work, rather than people having missed innovation opportunities.

Nothing wrong with distinguishing syntax. It’s the “just” that bothers me. Highlighting syntax is not always the most important thing to us. The information we want from code depends on what we’re trying to do. I’m interesting in different things if I’m writing greenfield code vs optimizing code vs debugging code vs doing a code review. I should be able to swap different highlighting rules in and out depending on what I need. I should be able to combine different rules into task-level overlays that I can toggle on and off.

Crawford writes, “The technocrats and optimizers seek to make everything idiotproof, and pursue this by treating us like idiots. It is a presumption that tends to be self-fulfilling; we really do feel ourselves becoming dumber. Against such a backdrop, to drive is to exercise one’s skill at being free, and I suspect that is why we love to drive.”

I shared this sentiment with my coach, and she shared a method called Extrapolation: to compartmentalize your thoughts and actions you need to close them before you move on to another task.

It’s simple to implement. I ask myself a few questions to extrapolate what I need to take away before I move on to the next task:

“People keep reading self-help and revisiting the same ideas because that’s precisely what we need: to be reminded.

The problem is not that information is unhelpful, but that attention is fleeting.

Nobody focuses on one idea every minute of the day. Good books refocus the mind.”

That’s what the Biosphere 2 project in Arizona was trying to do in 1991. I was so interested in this experiement that I spent time locked inside their test module. But this $150 million structure was built by a theater group instead of scientists, and therein lies the drama worthy of a film. Skip the comedy (Biodome, 1996) and watch Spaceship Earth (2020), a new sympathetic documentary on this remarkable project. What they learned, of life support and human dynamics, should be better known. (Imagine being really locked down for 2 years.) Streams on Hulu, Amazon. — KK

“Agree the world into being”

Writing fiction is such a rest from reality, not because you “get lost in a secondary world” or any of that bullshit, but because of this: you can begin a book by saying, “Wednesday evening at a quarter to six, and the traffic was a little lighter than usual.” Whereas if you said that aloud in the real world, someone would immediately be telling you that, if anything, the traffic was slightly worse today than yesterday. Writing is the pure relief of not having to discuss everything that happens in an attempt to agree the world into being; it is, for instance, the reverse of Twitter. Don’t let anyone tell you there’s anything else to it. In fact, don’t tell anyone you read this & don’t discuss it with anyone.

This is nice, from Bandcamp.

For many artists, a single day of boosted sales can mean the difference between being able to pay rent or not.

Tom’s done a call-to-blogging. Here’s some from the digital crates.

Buy some things you love today and it’ll help more.

An icon aging into Americana. Home